I imagine some of you may be wondering “Why Dani J. Norwell?” so today I want to dive into the depths of my decision and walk you through the many reasons and considerations along the path to my perfect author name.

“What’s in a name? That which we call a rose by any other name would smell as sweet.”
—Shakespeare

The significance of a name became top-of-mind for me when I realized that I would need to decide on my “author name.” I mentioned in my post “Lessons Learned as a First Time Self-Publishing Author” that new authors should consider their author name early and often and I very much stand behind that statement.

If I could do it all again, I would have given more weight to this decision earlier in my process. Now, to be fair, I had a number of options I liked bouncing around in my head for a while, but I waited until after my first collection of short stories was written to really settle on one choice. I guess I thought that, with time, it would become clear to me but finalizing that decision felt like a really big deal! It required active consideration, not passively leaving the topic at the back of my mind for weeks, which is what I did.

Before we get into the specifics of my process, I think it needs to be said that it’s just not every day that you get to name yourself. Writers have a very special opportunity to decide how they want to present themselves to the world and so I did not want to take that privilege lightly. I hemmed and hawed a lot on my own, then took to the internet to see if there were any factors I should be aware of that I wasn’t yet considering. What I learned from other articles on this topic was that the options are endless. Of course, you can choose any variation of your own name, you can choose a completely anonymous pen name, or you can choose to use a different name for each publication.

What I hadn’t realized originally, though, was that traditional publishing houses often ask authors to change their names in order to fit their genre better! The often-cited example is Allison Potter, who was advised to change her name to Ali Knight—a much more modern, edgy name—since she writes thrillers. Did I need to consider my genre too? I found this particularly difficult as I like the idea of writing thrillers in the future but my current collection and the one I plan to write next are far from that genre.

At the same time, I was certain that I did not want to take a different author name for different books. I know a lot of famous authors do this; I know this is not an uncommon practice. Still, I believe individuals can have very different tastes (for example, I love true crime documentaries and sappy coming-of-age high school movies equally)—why can’t that be reflected in the same author writing different genres? Nonetheless, this mentality put even more pressure on me to “get my name right” the first time. So, now that you have all that background information, here are…

The five factors I prioritized when choosing my author name:

1.) The Radio Test: Many articles on the topic of choosing your author name emphasize the importance of “the radio test.” This is essentially the based on the question:

If someone heard your name on the radio, would they 1.) be able to remember it and 2.) be able to guess the spelling of it to successfully find you?

This is the exact reason why authors often opt for the simplest version of their names. Daniel Gerhard Brown goes by Dan Brown; Eleanor Marie Robertson goes by Nora Roberts; John Ray Grisham Jr. goes by John Grisham. Even when using one’s own name, it is common to simplify it to something that rolls off the tongue and raises the fewest doubts in terms of spelling. As you can imagine, my given last name “Jauregui” does not score particularly well on the radio test. My married name “Norwell” fairs much better.

2.) Saturation of the Market: At the same time that one wants an “easy name,” one also wants to avoid taking an author name that is too common. Remember Allison Potter? The other reason why she was asked to change her name was because the Harry Potter saga is so popular it will easily rank before any of her books when someone searches for “Potter.” It would not have been a smart move to try to compete with that reality. For this reason, I took to Amazon- and Google-searching both of my last names and I have to admit that I was surprised by what I found!

While there was only one other author with the surname “Norwell” selling books on Amazon, there were FIFTY-SEVEN pages of books by authors with the last name “Jauregui!” I’ll admit, there was originally a part of me that felt like I should forgo caring about the radio test and “do Jauregui proud” by publishing under my maiden name. Growing up in the United States, this last name was difficult and unusual, but I’m proud of it and I had this dream of making it a household name one day. However, those searches proved to me that Jauregui already is a household name!

Now, it should be noted that many of the books written by Jaureguis are written in Spanish so perhaps they are not my direct competition. Still, in today’s globalized society the Spanish language books rank right up there on the first page with the English language books. As a result of my research, I realized using “Jauregui” would not serve me well in terms of either of these factors.

3.) My personal identity: Despite that realization, my struggle still persisted because the matter of my name aligning with my personal identity was important to me. Some authors specifically choose a pen name that can’t be traced back to them, but I wanted a name that did reflect me as a person. And, as many married woman may be able to relate to, it can be tricky to know which name “feels more like you.” I have been a Jauregui for nearly three decades and a Norwell for less than two years.

Of course, I want to identify with my new family name just as much as the one I’ve had from birth, but that feels like a longer process than the amount of time I had to give it before choosing my author name. I wrestled with this factor perhaps longer than any of the others because I knew “Norwell” was the smart choice in terms of marketability, but I needed to feel like it was the right personal choice for me too.

As you obviously know by now, I decided that it was. I’m in the Norwell game for the long-haul and so I have no qualms over aligning myself with that identity for the rest of my career. The piece of my heart that was holding me back was concerned about losing “Jauregui” altogether. That’s why I chose to take a middle initial. “Jauregui” may be too difficult for the general public to know how to spell or pronounce, but it’s a part of me and it will remain there in spirit in my “J.” [For anyone who’s still wondering—“Jauregui” is pronounced /jer eck ee/ in English or /har reg ee/ in Spanish.]

4.) Ambiguous or Gendered: With the importance of keeping my “J.” in mind, I was actually very close to going with “D.J. Norwell.” In spite of others’ concerns that people would wonder if I were an author or a disc jockey, I liked the idea that “D.J.” felt very me while, at the same time, left my gender up for debate. I kinda liked the idea that, at first glance, new readers wouldn’t know if I were a man or a woman and therefore wouldn’t have any expectations one way or the other.

However, a friend of mine brought up a good point. The common practice of using initials instead of first names stems from a time in which women were not taken seriously in the working world and literally couldn’t dream of getting published unless they pretended to be a man. We are beyond those days. In a certain way, perpetuating the practice is in opposition to an environment in which women proudly display their names, knowing that they will be taken seriously regardless of their gender.

On one hand, I felt like “What does it really matter? I’m just one author; one name doesn’t make that big of a difference,” but once I heard her argument, I couldn’t un-hear it. If this silent movement away from that custom exists, I prefer to be a part of it. However, I have to admit that I was not willing to go with the sing-songy “Danielle Norwell” and so “Dani [don’t forget the] J. Norwell” it was!

5.) Genre-neutral: The question of genre was the final bit of the criteria I based my name choice on. Before I got married (and had the rhyming issue to consider) I had definitely envisioned my author name including “Danielle”—it just feels like an author name to me. However, it feels like a more traditional, feminine author name. I’ll just go ahead and say what we’re all thinking; when we hear “Danielle” in the book world, we think of Danielle Steel. No offense to her, because I have to admit I haven’t read any of her work, but I simply do not see my writing style aligning with hers.

Perhaps this first collection of short stories falls into the more traditional, family-centric themed literature that one expects of a name like “Danielle,” but I wanted to ensure my name was a bit more versatile than that. Apparently longer names like “Danielle” align well with romance and women’s lit, but not action and thrillers. For those genres, short is best (remember “Ali Knight”?).

And so it was finally, finally settled. I would use the first name “Dani”—a bit more modern and catchy—with a middle initial—to maintain my personal identity—and the last name “Norwell”—which is easy to remember and feels a bit traditional. The best of both worlds!

So what do you think? Do you like the choice I made? Could you have ever imagined all the thought that went into it? If you’re trying to decide on your author name I’d love to hear what you’re considering, too!

The Importance of Genre 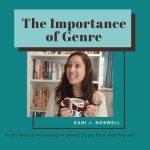 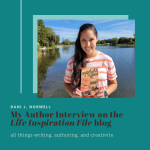